I was recently watching on YouTube a video involving a 70 bhp “Rat bike” Harley and a brand new 180 bhp Honda Fireblade in a street drag race (see 1). Surprisingly, the old pushrod won easily 3 times in a row. It kind of demonstrates how important the torque is in a drag race and why the Vincent engine was one of the Drag racers’ favorite choice from the fifties when George Brown converted his hill climb race bike Nero into a straightliner.

Subsequently and for decades, many teams used the Vincent powerplant around the world for this purpose, like the TeamPegasus which was formed by three passionates: Derek Chinn, Mike Butler & Ian Messenger. They started in 1967 to build & race multiple Top Fuel racers under the name of Pegasus. After a first try on a 600 Panther, the team selected a Vincent power plant which was run naturally aspirated with the stock displacement, before the addition of a supercharger and an increased displacement to 1458cc.

In this latest configuration, the bike achieved 9.83 sec at about 150mph for the standing quarter and the team started to win from 1971 various championships including the British Drag Racing & Hot Rod Association and National Drag Racing Club. Pegasus with the Vincent engine was used until 1974. When Mike Butler left the team, a Norton Supercharged Twin-Twin based was built and raced until 1980. Today it has found its last home at the National Motorcycle Museum, Birmingham. Its best performance was 8.39s at 170 mph for the standing quarter mile in 1978. 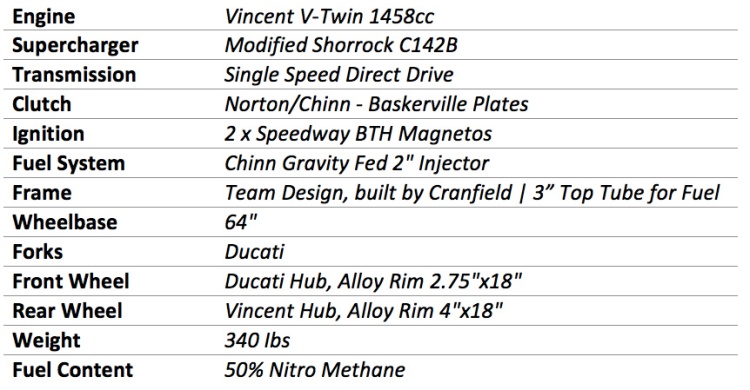